Just like Pynchon, Salinger couldn't stand media attention. He didn't do the public-reading / signing-authographs / creative-writing-workshop / selling-movie-rights type of routine. He was the writer without a face. Or at least without one constructed by the media. And without a voice outside the one of Holden Caulfield, Franny and Zooey Glass, and a few other fictional characters that shaped the sound of American lit. and were translated in gazillions of other languages.

But no matter how hard he tried to hide from the eye of the press, eventually they tracked him down. And that's when they took this photo. 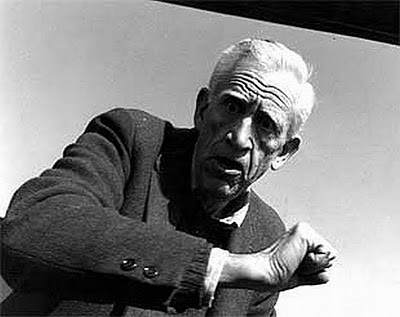 Here's how DeLillo (who later on used it as an inspiration for Mao II) describes it in an interview:

"[...]it was a picture that appeared on the front page of The New York Post, in the summer, I think, of 1988, and it was a photograph of J. D. Salinger. They sent two photographers to New Hampshire, to stalk him. It took them six days, but they found him. And they took his picture. He saw them and they saw him. When they took his picture he came at them. His face is an emblem of shock and rage. It's a frightening photograph."

Isn't it sad and weird how the media framed his death almost exclusively as the death of a reclusive artist, instead of one that created some of the most fascinating characters in contemporary American lit.?