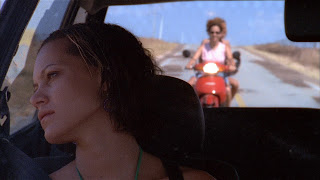 As in the case of many good movies, the story of this one sounds rather banal if I try to retell it in one sentence. So I won't. Instead, here are just a few things I liked most in O Ceu de Suely:

• How the small-town life of Iguatu is pictured. The heat, its quiet hopelessness, the dead ends and the no-way-out.

• Hermila/Suely. Just everything about the vivid and so utterly real way she moves, talks, laughs, dances and cries on the screen.

• The final scene. You see the camera completely fixed, with the road spread out in front towards the horizon and a big sign above the road saying “Aqui comeca a saudade de Iguatu”. Suely’s bus passes forward until you can’t see it anymore and then Joao appears on his motorbike and slowly follows the bus. The camera stays there absolutely not moving for what seems like a loooong time. It must be over 3 minutes (pretty bold move on the director's part!). And probably just when you start thinking this is the end and expect the cast and credits to soon show up on the screen, you see his motorbike reappearing on the horizon. At first it’s just a small spot. And that it grows approaching the camera. And of course you have no idea if he’s coming alone or if she had a change of heart, got down from the bus and is now coming back with him. And then for what seems again like quite some time you’re pondering on the two possibilities, while the motorbike advances towards the camera 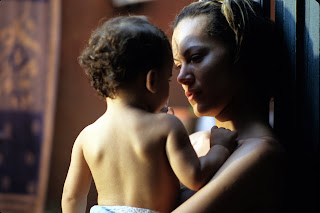 and you get to see his silhouette clearer and clearer. And until the last minute you might have the secret hope that she’s up there on the back of his motorbike and that this will be clear as they get close enough to the camera. But in the end she’s just not.