What's really special about this film is that it features 3 different characters speaking 3 different languages! We're in 1944 and two soldiers fighting on different 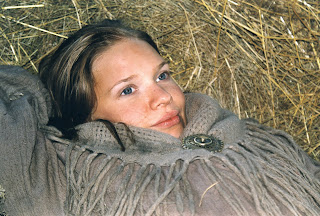 sides (Ivan - the Russian - and Veiko - the Finnish who wears the SS uniform, but hates war) end up through a complicated series of events and coincidences into the home of Anni. She's a Laplander living in a small hut in the middle of nowhere (i.e. remote areas of Finland), with a husband gone to war four years ago, a small herd of reindeer and a great longing for the company of the opposite sex.

So how does dialogue work between 3 characters brought together by war but who don't understand each other? You might expect some really dark, absurd-theatre type of humor coming out of this. Just like some of those Ionesco plays in which each character delivers its own isolated discourse and is incapable of making sense of what other characters are saying. But in reality the funny situations brought up by the language barrier so obvious in Kukushka turn out to be pretty light. You might often find yourself genuinely laughing without the awarenss of a gloomy irony in the subtext of the non-sensical dialogue.

Like when Veiko tries to find a common language with Ivan by quoting titles of famous Russian novels ("war and peace", "the idiot" etc). Or when Ivan tries to share his desolation regarding the war and his life in general, while Anni replies with really prosaic pieces of advice about how he shouldn't eat mushrooms from the woods. 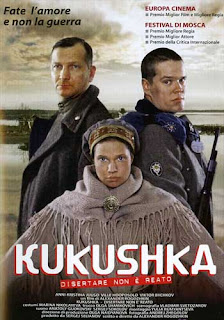 All in all, the statement of how irrelevant can language be in human interaction is pretty clear until the end. It makes you think (without annoyingly finger-pointing) about what's really important & all. Plus Anni is a really cute & eye-catching character, even when the script pulls her (a bit too clumsy maybe) out of the real world.