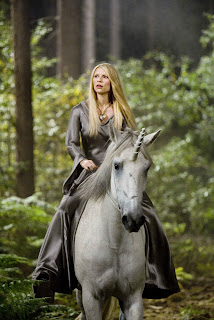 This is a fairy-tale by the book, with falling stars that turn into beautiful young girls, with evil witches that can turn a man into goat just by a touch of finger, with magic lands that stand right in the heart of England, separated by a wall from the real world.

Obviously, includes plenty of cheesy moments and a whole collection of clichés and banalities from the arsenal of fairy tales and folk stories.

However, there are (at least) two episodes that are slightly disruptive in this frame, refreshingly subverting the story’s main discourse:

1.The dead princes who observe the key-moments of the action as ghosts. They sit on the side and add subversive comments to whatever happens (a sort of Statler & Waldorf from The Muppet Show, if you may), thus functioning as a sort of postmodern viewer that undermines drama by dark humor and irony.

2.Memorable section: Robert DeNiro in the role of a seemingly butch captain of a flying ship, who in fact proves to be an effeminate and hyper-sensitive probably-gay guy, who likes to spend time in his wardrobe listening to loud can-can while trying on glamorous corsets and putting on make-up. This is definitely an actor that does not stop reinventing himself! From the captain who leads its ship with an iron fist, with a well-known reputation of cruelty and aggressiveness, he turns into a sensitive “whoozie”. This is again a subversive twist, which I think DeNiro plays wonderfully.