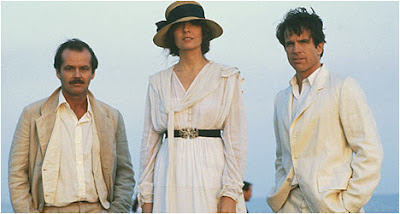 Half-fiction, half-documentary, this film directed by Warren Beatty follows the real story of journalists & couple Louise Bryant and Jack Reed. He was mostly famous for his apologetic report of the Russian Bolshevik Revolution in his book Ten Days that Shook the World, and for his active support of Marxist ideology, which he tried disseminating in the United States as well. Obviously lacking any success.

Apart from being a moving account of the troubled, on-again off-again relationship between a feminist and a Marxist insurrectionist – both roles that were hardly conceivable in the first decades of the 1900s in the US, when the film takes place –, the film also makes a vivid picture of the atmosphere surrounding the Bolshevik Revolution, noting significant details of context and empathizing with its reasoning. Until far into the film the atmosphere is very much pro-revolutionary, which is rather unusual – I think – for a Made in Hollywood film, especially in the 1980s when the Cold War was still at its peak.

Its structure is also atypical. Sections of fiction – featuring Diane Keaton and Warren Beatty as the main characters, and a few appearances (occasional, yet carrying great weight) by Jack Nicholson in the role of Eugene O’Neill, once lover of Louise – are juxtaposed with sections of a documentary. People who really took part in the events, who knew the characters and are about 80 at the time when the film is made, retell fragments of the story from their perspective.

Though fairly long (over 3 hours), the film is highly watchable and well-done, creating an atmosphere one doesn’t find that often in late cinema.