An alarmist hotchpotch of how the Bible is in fact pure plagiarism, how 9/11 was truly an “inside job” done by the American government and how corporate-controlled media can convince you anything is real and how this will be used by the “people behind the curtains” to take over the world! Summing up, according to Zeitgeist, The Movie, we’re up for a gloomy future, a state-of-the-art Owellian world. What’s in store for us is a dystopic and singular global state where all our rights and liberties will be taken away and we’ll just be slaves working for those nasty people that build their evil plans “behind the curtain”!

Yep, a real conspiracy theory. With the “scary music” and the doom predictor included. 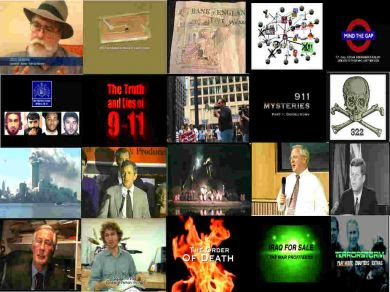 So “dangerous” that imdb.com doesn’t even have it listed … Though my guess is this might be because it’s virtually impossible to find details about its production (Who directed it? Who wrote it? etc) Don’t get me wrong though: the film doesn’t look like it’s done by an amateur. Oh no. It seems incredibly well documented. More like a Phd trilogy on religion, politics and the media. It also does plenty of intelligent associations between facts. Some you’ve seen before in other conspiracy-theory books or in Fahrenheit 9/11, but most are brand-new.

What this film lacks though is a clear connection between its three parts, as well at least an attempt to seem objective. To me this film was pure propaganda. And what’s even worse: poorly targeted propaganda. It’s against Christianity, against the Rotschild family, against Bush, against the tabloid media… And this is just the top of the list. I think this fact makes it very unlikely for the viewer to suspend disbelief and buy what the film is selling. I could live with its random quotes, from Roosevelt to Jimi Hendrix, and with phony slogans like “The Revolution is Now”, but having the guys who did this film pretend this is the only “true” side of the story, it’s just a bit too much.

I’ve ended up watching Zeitgeist, The Movie following some recommendations. Many people seem to think it’s a must-see, despite of its radicalism. It got over a million views on YouTube since June, which I think is something. It also stirred some controversies. The truth is that it does keep you hooked to the screen from beginning to end. However, it looks to me rather like an unfinished project, still in need of some “fine-tuning” in terms of structure, use of sources and tone.