A Crude Awakening: The Oil Crash

The main argument of this documentary is that the era of cheap and abundant energy is about to come to an end, and what we’ll be facing in the near future is the necessity to do with scarce and expensive energetic resources. And the main item on the list is – of course – oil. To support their argument, directors Bill Gelpke and Ray McCormack remind us how dependent we really are on oil, as well as how this is a non-renewable resource that has been abused and continues to be abused, and thus will soon finish.

Just like in all the Michael Moore films – though perhaps with less bias – and others such as The Corporation, the implied “guilt” is said to lie in the hands of the United States. In this case, mostly because they consume a disproportionately high amount of energy. They’re only about 5% of the world’s population and yet they consume about 25% of the global energy. But also because they don’t seem to “value” it right, i.e. they expect fuel to be cheap (whereas European countries don’t, for example). 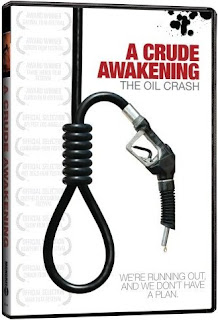 The scariest part of the film to me was how it gradually deconstructs counter-arguments. You might be thinking, wait a minute, didn’t we invent biofuel and are working on improving it? With very concrete data, the movie shows there’s no way biofuel can be a viable solution, mostly because the money needed for its production top its real value. You might also be thinking, what if we cut our spending of energy starting tomorrow? Again, the film shows that even if the US implements all the required policies, due to the unavoidable economic growth (we live in the era of economies of scale, remember?), in a few years we’ll be back were we started.

As a friend recently suggested, we might see the theories of James Lovelock lying at the core of the film, such as the Gaia hypothesis, thus explaining how the imminent ending of oil as a resource will most likely have a very grim impact on humanity.

I’d say this film is a must because it touches upon some of the hottest policy issues that are debated globally right as we speak. It’s not as entertaining as one of Michael Moore’s films, and I see some reviewers down-graded it for that, but to me that only contributes to making it really dead serious.