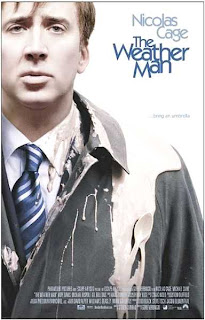 It’s almost hard to believe this movie comes from Gore Verbinsky – the mainstream, action-movie director known for box-office hits such The Mexican or Pirates of the Caribbean.

To me The Weather Man looks more like an Alexander Payne film (see an older post on About Schmidt). And that’s because it focuses on a rather ordinary fellow, whose life doesn’t really include anything spectacular. Except perhaps the fact that he occasionally gets hit by flying milkshakes :). He’s Dave Spritz, weatherman for a TV network – a job that makes him quasi-famous and hence sometimes a target for pranks from the part of people with a somewhat vicious sense of humor (implying semi-liquid food thrown on Mr.Spritz as he drives with his window open or walks on the street).

What would probably characterize this guy best is the phrase “good-enough-for-me”, which he doesn't utter as such but seems to be like a motto for the way he makes choices in life. He’s not unhappy. But he’s not happy either. He has a job where he works little and gets paid a lot. A former wife and two kids. A failed novel written some years back, now gathering dust somewhere in a drawer. Plus a famous-writer father who doesn’t have too much time left to live (and who’s played so well by Michael Caine). To put it simply, Dave Spritz didn’t quite excel in his personal life, but he is responsible for another type of “American accomplishment” (as Caine’s character so subtly underlines at some point). He is about to be promoted to a job in the national TV network, thus adding a few more figures to his annual revenue. Does this make him happier? The film doesn't really suggest that.

Though it received mixed reviews, possibly because the loose ends it leaves in the narrative might make it a bit unconvincing at times, I think it’s worth watching. And one of the reasons is this particular freedom it gives the viewer in terms of interpretation, this lack of any clear resolution (that in the end makes you wonder – was there any problem in the first place?). It might be a film which subtly criticizes a society who lately seems to equate money with happiness more than anything else. It might be about how we tend to be more and more spoiled in our constant search of getting everything as easy as possible, but always slightly unsatisfied with what we get. Or it might just be a funny-sad look at an ordinary case of latent depression, like most of Alexander Payne’s movies.