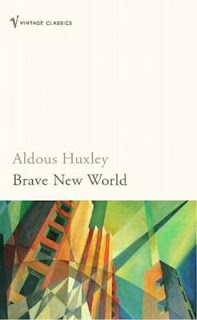 It’s amazing to me how much insight into future social and economical tendencies could Aldous Huxley provide in the 30s, when he wrote Brave New World. I don’t think many other people back then could have predicted that a few decades ahead the key-word in societal behavior would become „consumption” (except Keynes, whose theories Huxley probably wanted to satirize a little bit), and that all individual efforts would be directed towards overarching hedonistic principles.

But apart from the visionary writing, what I probably enjoyed most is the parallel view Huxley builds between the ideology of the dystopian society he imagines and our current perceptions on „what is normal” (more or less unchanged since the 30s). He constantly shocks by challenging mainstream views on quintessential concepts that are in the center of our lives, such as family or culture, and presents an environment built in radical opposition to our own. Monogamy is a disgrace rather than a virtue (in addition, the concept of „family” is inexistent and women no longer give birth, because children are conceived by technological means); the use of light drugs is encouraged and at times even compulsory; social layers are enginereed in such a way that they preserve a perfectly balanced society, where everyone is happy and healthy.

On top of it all, Huxley has a hidden yet incisive sense of humor. It’s rather funny (in a dark way, of course) to realize that in a society where the sources of all unhappiness have been taken care of, literature is practically dead. Shakespeare’s plays, and drama in general for that matter, are primarily based on conflicts and when you can have everything solved with a pill of soma, the struggles of Othello seem really silly.

I think coming back to Huxley's work from time to time provides a very good and clear lens one could use in looking at the world around. And if this sounds rather prophetic, well, it's because it is :).