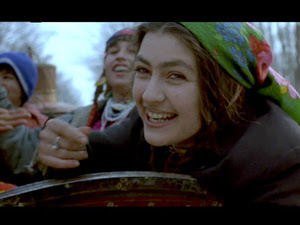 Perhaps the most authentic film I've seen about the life of Rroma/Gipsy communities in the Balkans, Gadjo Dilo often resembles more to a documentary than to a piece of fiction (as opposed to some of Kusturica’s films on the same topic). Director Tony Gatlif takes a raw/un-sweetened view at the rural life of a Gipsy community, with the ensuing tribal culture, illiteracy and almost unbelievable lack of modern life resources (this is mid 90s and they don't have electricity!), but at the same time with an astonishing joie-de-vivre and inherent cheerfulness in approaching life. It’s that type of exuberant energy that is conveyed so well through the bright rhythms of authentic Rroma/Gipsy music – which is in fact the driving force of the movie.

The main character is Stephane, a French guy probably in his 20s, who comes to a remote village in Romania in search of Nora Luca, a Gipsy music singer which seems to have been his father’s favorite. What I found particularly ironic is how the small community at some point looks at him with skepticism ("What if he wants to steal our chicken?", "What if he’s a gadjo dilo – crazy stranger – who brings bad luck?"), thus reversing the archetypal roles by which Gipsy ethnics going to the West are stereotypically labeled as thieves or delinquents. The cultural clash brings, as expected, a lot of surprises to the viewer, but generally the film – although highlighting issues of ethnic discrimination and huge social prejudice against Gipsies – preserves the cheery, good-spirited atmosphere and intense energy of Gipsy music and dancing.

I guess what completely won me over is the easy-going/light-hearted approach to everything that Gatlif's characters have, as well as that relaxed playfulness that most of us “civilized” people loose while having to practice daily seriousness at a desk.