From guerrilla fighting to presidency. The story of Nelson Mandela.

Seeing Invictus a few nights ago brought up something I believe few people remember -- before adopting the policy of reconciliation in South Africa, that the movie talks so much about, Nelson Mandela led for many years the armed branch of the African National Congress. This organization’s anti-apartheid activities were quite far from the Ghandi-inspired views that Mandela later promoted. Bombing campaigns and civilian casualties were routine practice. In fact, until 2008, Mandela was on the international terror watch list issued by the United States.

This made me wonder if any of the Guantanamo prisoners might follow a similar route and run for the White House 30 years from now. 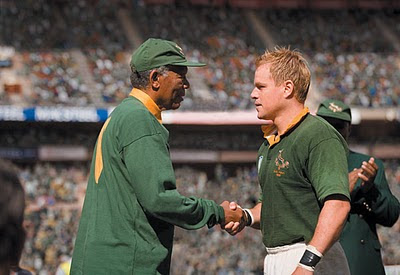 Du reste, Invictus is probably not among Clint Eastwood’s best films. Apart from being awfully telling in so many instances, it also includes vast sections that are so long, uselessly detailed and predictable that I had a hard time not falling asleep while watching. The 20-minute rugby match is one such scene. I think Clint Eastwood loses focus in his attempt to glorify Madiba, to depict the portrait of a saint. And as we all know, saints are sweet but incredibly boring. I would have loved to see more about his youth as an ANC activist. Or about his time in jail. And much less about rugby.