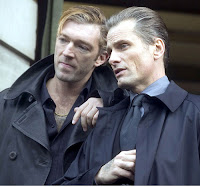 Eastern Promises. It's quite late in the film that you realize the actual theme is human traficking. Not that this makes it less good or less bad, it's just that I have this instinctive tendency to think this is a bit of a trick used to gain attention (like, for example, some might say Brokeback Mountain won all those awards because it's about gay cowboys). Anyway, one might also argue there are lots of very bad films about controversial subjects, so when judging we shouldn't stop there. And I absolutely agree. The truth is Naomi Watts and Viggo Mortensen make the film entirely credible. This might actually be his best role I've seen up to now. And generally speaking, despite the somewhat „5 o'clock news” type of subject, nothing is overdone. Vincent Cassel and Armin Mueller-Stahl are also very pleasant surprises in terms of acting.

No Country for Old Men. No clue what this film is about. Javier Bardem kills a bunch of people in cold blood and that's about it. Yes, the suspense is there, high and gradually structured by the Coen brothers, but in the end nothing makes much sense. And unlike in Barton Fink or Fargo a conclusive ending that would lead this suspense somewhere is absolutely missing. And you're just left there waiting.

Fast Food Nation. A review of the reasons why fast food is so bad and how the companies that are in this industry are exploiting people and animals, plus damage the environment. Most of the things presented as bold assertions of the truth are in fact yesterday's news. Seen and debated in a number of other films and forums, probably in a less obvious and overly dramatic manner.

Little Children. Very much like American Beauty or Little Miss Sunshine & equally good. Masterfully captures contemporary anxities of people who can't live up to society's carefully crafted patterns of what is acceptable, what represents success and several musts we are probably struggling towards without thinking too much. Made me think of how this whole new pleasure-oriented, happiness-praising, Western-style way of thinking is the perfect setting for never growing up.

This is England. A look at Britain during the Thatcher era through the eyes of a young lad whose father died during the Falklands war and who is joining a group of skinheads. A revealing view upon working-class Britain during the 80s. Very well done, I think.

The Great Debaters. I think Denzel Washington is becoming one of my favourite actors after American Gangster and this. Here he's also a pretty good director. An inspiring film recreating the time when segregation was still officially practiced in the US educational system(nowadays it's probably unofficial, but that's a different story), and a debate team from a negroes' university manages to challenge one from Harvard. Though using such a sensitive issue as racism might again be considered a trick to gain attention, part of me thinks there are never enough films made about racism. Can't wait to see the day when they'll start making films about Arabs and gypsies.