Yes, the title is terrible! I would've probably skipped watching if I hadn’t come across this guy’s review and the fact that the film’s director is Michael Winterbottom.

I saw two of his earlier films some time ago and what I liked was how they mix the reliable, heavy and thorough air of a good documentary with dramatic fiction. Both in 24 Hour Party People (where he watches the rise of Joy Division, Happy Mondays and the like the in the midst of the early 80s’ new wave scene in Britain) and in The Road to Guantanamo (which gives the painful account of three British Muslims who end up by mistake in the famous Cuban prison), Winterbottom starts from true stories. And sticks to the facts. In A Mighty Heart he relies solely on professional actors to help recreate the story, unlike in The Road to Guantanamo, where the real characters are also present. And it's not any professional actors that we're talking about, but Miss Barbie herself: Angelina Jolie. 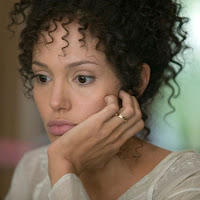 Despite some critics saying her whole Hollywood persona gets in the way of us suspending disbelief and truly picturing her in the shoes of Mariane Pearl, I think she does a great job in bringing this character to life. The accent, the pose, the smiles, the unspoken pain, the composed face in the TV interview – nothing seems to be overdone. It all contributes perfectly to the portrayal of a 5-month pregnant wife (and journalist) whose husband (also a journalist) gets kidnapped and beheaded in Karachi, Pakistan just days before the couple planned to leave Middle East.