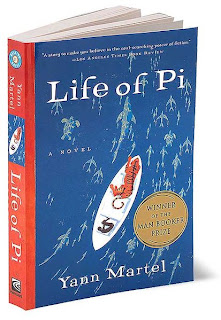 There’s a certain raw yet unavoidable charm surrounding novels about characters who struggle for survival. Take Robinson Crusoe. Stripped from urban anxieties and daily tribulations about self-fulfillment (i.e. all those thoughts we share with our bellies full), these stories seem to go straight to the roots, to what is really important. In other words, we’re back at the bottom of Maslow’s pyramid. Struggling to stay alive, fighting for basic survival needs and often finding real meanings (on life, religion & co.) during the process.

The main character in Yann Martel’s Booker Prize winning novel – Life of Pi – is a bit less lucky than Robinson Crusoe. He is the only survivor in a shipwreck and manages to stay alive for ten months in a lifeboat in the middle of the Pacific. The sunken ship was supposed to take him, his parents and brother, as well as whatever could be packed from their family business (a Zoo!) to Canada. They were to start all over, far from the troubled times of an India led by Indira Ghandi (we're in the late 1970s). And they were supposed to take this trip together with most of their animals from the Zoo (it's almost an updated Noah's ark!).

Did I say the main character, Pi, is the only survivor of the shipwreck? I meant the only human one. His company is a 200-kilo Bengali tiger, which needs to be fed. Pretty rough, huh? He does manage to survive though. And finding out how was my main drive when picking this book, so I won’t spoil the pleasure for you :).

The whole suspense and adventure keep you glued to the pages, unable to stop reading and see what will happen. But what makes the novel really good is, I believe, the final part. What Martel does in the end is to anticipate all the potential suspicions of the lucid reader (Is it really possible to stay alive for so long in the midst of the Pacific? In an 8-meter boat with a huge and hungry tiger you only feed with fish?), and thus build a whole new narrative that fits “rational” expectations. What you get in the end is a complete retelling of the whole story in a new frame, plus the implicit possibility to choose the version you like most.

Bookmark: The novel is to be made into a movie by Jean-Pierre Jeunet (Delicatessen, Le Fabuleux destin d'Amelie Poulain), scheduled for release in 2009. Really looking forward to that!