Yes, this is a cartoon – DreamWorks style – and yes, it is primarily for children. Hence, it only comes natural that it features cute little animated animals split into two sides following moralistic criteria. We have the good side – the turtle is old and wise, the squirrel is a bit dumb but nice and affectionate, the hedgehogs have good family values, and so do the opossums, the skunk knows she stinks but has a confident attitude. There also a raccoon whose intentions are rather dubious at first but in the end he’s really part of the good guys. On the “bad” side, we have the bear, which is big and threatening and wouldn’t think twice before killing for food. And what’s most surprising is that the humans are also in the “big and bad” boat. 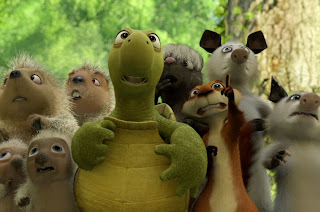 So yes, the moral of the story for all the kids watching is they shouldn’t lie, steal and hurt cute little animals and whatever else. But there’s also an incredibly subversive message, leaning strongly left I’d say, against humans destroying the wild and the lives of animals by cutting woods to build rich suburbs. The message extends to everything that human presence implies: the junk food, the garbage, the desire to extinct everything that doesn’t fit into their housing plans, plus turning all those cute little animals into avid consumers of whatever junk they can lay their hands on. So I think consumerism is also heavily targeted by this story, at least for people who know where to look.

I wonder what little kids make out of this cartoon showing how they’ve actually ended up on the wrong side. They’re not little hedgehogs or cute opossums, but rather part of the big bad human race.

Ah, that and the squirrel’s trip on caffeine (or was it some sort of amphetamine?) are really unusual stuff to include in a cartoon for kids, I think.