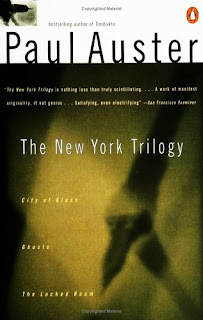 Though I think technically what Paul Auster writes is called detective fiction, he doesn’t go for the traditional formula – the mystery, the spying, the digging in the past, the surfacing of unexpected details, and then ta-daa!: the definite resolution – but rather for how these novels are written. We’re always talking about a detective story within (at least) another detective story, and that’s why “The New York Trilogy” has been described as meta-detective-fiction. Here are a few things that I had fun discovering and I enjoyed experimenting as anti-boredom/anti-dullness surprises in Auster’s books:

1.The traditional spying formula is turned completely upside down. In “Ghosts” (“The New York Trilogy”) the detective following a “suspect” realizes in the end that he is the one who is being followed. The reason? He's just a pawn in a game set up for inspirational purposes by a fiction writer.

2.A character pretending to be “Paul Auster” himself in “City of Glass” (“The New York Trilogy”), though in fact he is someone else. That was a fun fictional knack to use :) 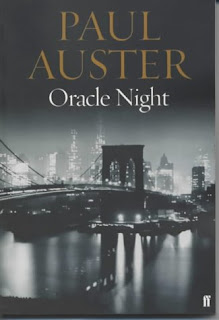 3.The use of footnotes in “Oracle Night”. Probably intended to trim the story as much as possible and/or not have it too clogged with details. However, you could almost make up a whole new novel by putting together all footnotes. I realize this is not a novel technique in itself (I believe Camil Petrescu used in “Patul lui Procust” decades before), but I liked the way it is embedded in the mystery-story pattern.

4.The urban atmosphere. “The New York Trilogy” in particular reminded me of an episode from Jim Jarmusch’s “Night on Earth”. Probably because they both happen in and around Brooklyn.

5.How each story features a character who at some point decides to walk out from his own life for no apparent reason. Leaves the apartment to drop a postcard one evening and ends up in a completely different city where he starts all over. Plus how these attempts almost always fail miserably. Not in terms of the character coming back, but rather not finding whatever he was hoping to achieve by taking a fresh start.

6.How Auster’s stories are always about other stories. There’s never a clear narrative line following “detective X hired by the Mrs. Y to find details on her missing husband”, but rather a series of digressions about the inner life of an auctorial “I”-voice or of the main character. In addition, these digressions do not lead to any clear resolution. It’s more like a mystery about a mystery that takes you inside the life of a number of characters. And what you get out of it is not a clear finale, not the feeling that the story started at point A and ended at point Z, but rather that you’ve experienced a large range of often unexplainable but so deeply human mindsets and feelings. And you’ll carry full episodes and bits of atmosphere with you for days on end.