The media gets us used to seeing the war framed by “humanistic” key-words such as death and loss of dignity, destruction and diminishing the value of life, extreme violence and horrific personal stories. However, this documentary frames the current wars upheld by the US from a pretty novel perspective: economic profit. 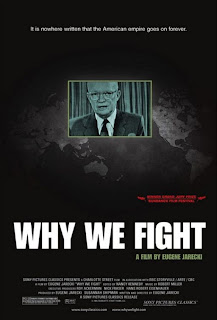 Why We Fight is a BBC documentary that takes its title from a series of propaganda films directed by Frank Capra during World War II. Back then they were meant to motivate people to join the army by explaining the purpose of fighting against the Nazis. Among others, the film analyzes how some of the arguments used at the time – like fighting for freedom / democracy / the liberation of people oppressed by totalitarian regimes – are functioning now. Do they still work in the case of the Middle East wars?

Though some of the film’s arguments are not new and have been a subject of debate for some time now – how the US practices economical colonialism, or how there’s a constant conflict between capitalism and democracy and lately capitalism seems to be prevailing most of the times – I found the documentary very well done, very professional. The use of sources seems to be quite balanced and strong arguments are built persuasively.

But what’s probably most valuable is its main thesis, which could be summed up like this. Starting from the fact that (i) when undergoing a cost-benefit analysis of war you realize it is a very profitable business and (ii) following the logic of economies of scale and scope, the profit gets bigger as the industry gets bigger, as well as (iii) adopting a market behavior led by rational choice (i.e. maximizing profits), it only comes natural to see more war and more conflicts developing.

Of course this sounds awfully pragmatic and you might be thinking but what about all the death and the violence and the innocent people who get hopelessly captured in the conflict? Well, following the conclusions of this documentary, it seems their voices as stakeholders are lower and lower, and their place at the decision-making table is more and more likely to be inexistent.