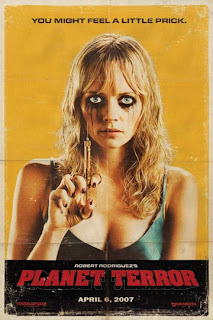 No famous names are on the list of actors that shows up in the first scenes of Grindhouse, juxtaposed with the image of a stripper doing her thing half-naked in a bar; everything filmed in 80s cheap-style studio effects. No Uma, no Samuel L., no Travolta. So just when you start wondering whether the mad Rodriguez/Tarantino couple wrote again a script so completely insane that all their big-star Hollywood friends abandoned them, a nice close-up of none-other-than-the-great-savior-himself, Bruce Willis, is up on the screen!

Although you later realize his part is practically inexistent in the film (I don't think he has more than 10 lines all in all), that close-up definitely does the trick. I mean, honestly, can you picture any action movie without Bruce Willis, Chuck Norris or Mr. Van Damme? And I believe a "true" action movie - with all the related blood-baths, corny dialogues (e.g. Bruce Willis' line #1: "Where's the shit?" :)), miracle escapes, tragic last-words-before-dying, breathtaking car races & the like - is what the Rodriguez/Tarantino are after. 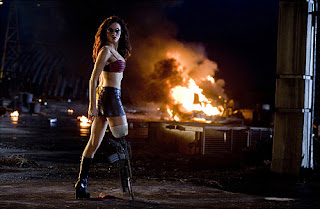 But the fact that pastiche is Tarantino’s middle name became pretty clear ever since Pulp Fiction. However, with Grindhouse I'm having some deja-vu issues. First of all, you have the same vampire-scenario as in From Dusk Till Dawn (though this time they’re some other type of creepy creatures), the same mixture of cheap sex and violence, all packed as a simulation of a good old pulp script. Plus, most fighting scenes - with the chopped limbs and the blood-showers - look so much alike the ones in the Kill Bills.

What's new is the way they patch together two different movies into a single one, creating some sort of a meta-frame (with kitschy ads, missing reels and trailers for other movies included in between). The thing works to reinforce the cheap 80s action-film pattern. But it also makes the whole thing unbearably long (190 minutes!). Though now that I think more about it, this is not so new either, since Tarantino & Rodriguez did it before in Four Rooms.

So all in all, I did get the humor and what they're trying to do, I digged and laughed at many of the funny scenes (e.g. the wooden leg dance, the "I killed Bin Laden" story etc.), but somehow I think Tarantino is not as good as he used to be. I feel he ends up imitating cheap/kitschy movies so well, that many times the irony escapes me and it's harder and harder to distinguish the fact that this is actually a pastiche.

Or maybe it's not?