I recently found this incredible picture from The Battle of Algiers -- my (and Andreas Baader's) all-time favorite film about terrorism. 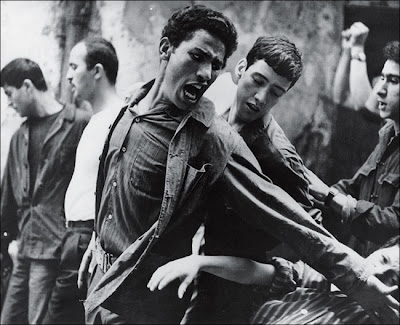 With its experimental mixture of fiction & documentary techniques (written and produced by a formerly imprisoned member of the FLN, Saadi Yacef, also starring in the film), Pontecorvo's classic uses primarily the viewpoint of charismatic character/historical figure Ali la Pointe to tell the story of Algerian liberation from the French colonial rule. Its depiction of controversial topics, including torture applied by the French army and explicit presentation of guerrilla warfare techniques led to its banishment in France in the 1960s. It also transformed the film into a marked source of inspiration for insurrectionary movements throughout the world, from the Black Panthers to IRA.

It's probably this heavy political weight, filling every second of neorealistic black-and-white atmosphere, that makes it such a captivating viewing, despite some obvious anachronisms.