Filling up holes in film library

Back to the classics. Watched Scarface (1) and Raging Bull (2) over the weekend. 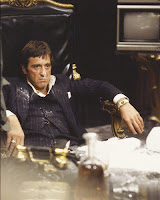 (1) Finally discovered the source of the famous Thurman/Travolta dance in Pulp Fiction. Knew Tarantino was a master of pastiche but couldn’t pinpoint the source up to now. It’s the Pacino/Pfeiffer dance in the first part of Scarface! Where he’s just another Cuban immigrant starting it off in the drug business and she’s the boss’ girl. Of courses Tarantino overdoes it, but I found the atmosphere strikingly similar. Plus, I believe the final scene in Scarface, where Tony Montana is fighting that small army of hitmen - blood and bullets everywhere - is to be found in similar tones in at least one of the Kill Bill’s, somewhere underneath the layers of the palimpsest.

(2) I can’t believe I’ve missed this up to now. Reconfirmed the idea that DeNiro is one of the best actors of our times. The changes he underwent to become boxer Jake LaMotta are absolutely spectacular. Liked how Scorsese captures the atmosphere of the 60s and early 70s, though the film was released in 1980. How he sticks to black and white and how he focuses on details without making this a lyrical or image-centered film (like the drops of blood dripping from the thick line that surrounds the boxing ring after LaMotta's most violent defeat).